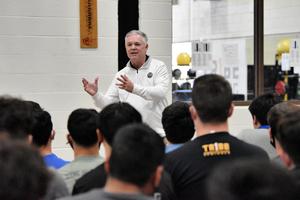 Poynor spent the past seven seasons as Pampa Harvester’s head football coach and athletic director, where he compiled a record of 45-35, 2-0 against the Indians. Prior to his arrival, Pampa was 20-52 with only one playoff appearance and no playoff wins. In the last four years, the Harvester’s went on to win multiple playoff games along with winning their first outright District Championship in almost 20 years. According to Maxpreps, during Poynor’s tenure, the Harvester’s threw for the most yards per game in the entire state of Texas.

Poynor said the opening at Seminole was intriguing to him for a number of reasons.

Poynor will replace Ty Palmer, who stepped down in January after two seasons as Indians’ head football coach.

“Being the face of the football program at a place like Seminole ISD is an awesome responsibility,” stated Poynor. “I truly believe I will do a great job as the ambassador for Seminole.”

Coach Poynor is known for his ability to connect with people and understanding the kind of influence a coach can have on his athletes. “Teaching character is one thing I promise to instill in the athletes at Seminole ISD,” stated Poynor. “I believe any successful program has to have discipline as its foundation. As a Christian, husband, and father of three boys, I believe the morals and character I will teach and display will help me build that foundation. Seminole will be proud to call me their head football coach.”

In his introduction to the District Leadership Team Tuesday morning, Superintendent Kyle Lynch expressed his excitement to welcome Coach Poynor on board.

“Coach Poynor is very dynamic and positive in his approach to his purpose and all athletics,” Lynch said. “He has a real gift at taking programs and elevating them to the next level. We’re pleased that we were able to get him here.”

Seminole ISD's hiring of Poynor received a ringing endorsement on Twitter from multiple individuals across West Texas and the Panhandle, as The Sports Drive radio host, Lance Lahnert tweeted “A man who lives life with a glass half full - not half empty - attitude like I’ve rarely seen. And...can flat out coach.”

Poynor said the plan is for his wife, Leah, son Brian and his family to join him at Seminole ISD.